Home >> In the News >> #YCTInnovators: Kyle Savitch (’21) Is Helping Lead the Growing Orthodox Community of Harlem 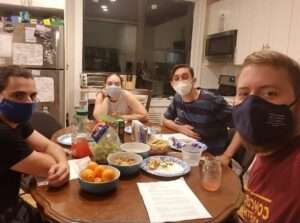 Kyle Savitch graduated from YCT in May 2021. Now, he is directing his energies full-time toward Kehillat Harlem, his grassroots Jewish community, where he serves as the rabbi. He will be helping build the Harlem Jewish community thanks to a grant from Start-Up Shul. Read our interview with Kyle about his work in Harlem as well as the spiritual journey that brought him to YCT.

We are so excited about your work as the Kehillat Harlem rabbi! How did this come about? How familiar were you with the Harlem Jewish community?

I’ve been living in Harlem since I moved to New York, for the most part. I founded Harlem Moishe House, and now my wife Liran and I live in Central Harlem. I totally fell in love with the community and Torah here. There is a very collaborative dynamic here between organizations and individuals. We are all growing and learning together, and investing in each other’s development. That’s not usually the case for most communities in New York, where congregations don’t need or want to do that type of collaboration.

I recently received a grant from Start-Up Shul—a program of the Aviv Foundation—to help continue building the Harlem Jewish community. A lot of that is really on-the-ground organizing and community-building.

What brought you to Harlem initially?

I moved to Harlem by chance. I was studying Hebrew at Middlebury and two college friends wanted to get an apartment with me. They happened to find a place in Harlem, and we moved in there. Then I got very involved in the community, and I really became invested in it.

What do you find most compelling about the Harlem Jewish community?

If there’s one word that is the most important for me in Harlem, it is the word “collaborative.” It describes the Torah of the community really well. Something else I really like is that so many people in the community are not where they started. There are people who grew up observant and now aren’t, but they are engaged. There are people who grew up secular, but they are now observant. The community is open and curious and interested and engaged in growth and change within each person in addition to community growth. Each person is on an individual journey.

A lot of the grant is just for hiring me for full-time work there. And the remainder of the money goes to programming. I’ll also be doing a lot of fundraising. We are hoping to get a space of our own. We want more infrastructure, more kosher food in Harlem, as well as Jewish social spaces to hang out in.

So as far as our goals, in addition to having a more regular minyan we are hoping to get a bigger space and grow from there. Recently, due to space concerns, we’ve been doing once-monthly services at the JCC Harlem. Due to the COVID-19 pandemic, we are continuing once-monthly services on Friday nights, and on top of that we want to have services more than just once a month.

We also want to plan more shiurim. One initiative I started was Harlem Torah Musings. In that program, a different community member leads the learning each week. And we’ve had thirty different, unique individuals teach. A few people have taught multiple times. And the idea is just to get people to share what’s meaningful to them. We recently shifted that model to a weekly recorded program called Half-Baked Torah where a different community member comes in to discuss the parsha and cook something inspired by that Torah. So we’re hoping to continue that as well as have more classes and events. In the early summer we had a Shavuot program in Harlem on a rooftop. We had like 30 people for Torah and cheesecake and singing. It was really beautiful.

Your work in Harlem began while you were studying for ordination at YCT. How were you able to balance your Harlem communal priorities with your YCT studies?

I’ve had support. There are other people deeply invested in the community, such as Liran, Dimitry Ekshtut (now also a YCT student) and Erica Frankel, his partner, among others. Erica and Dimitry, especially, took a major role in founding and establishing Kehillat Harlem along with others who have been with us since the start. It was a challenge doing it on a part-time basis as a student so I’m really excited to be able to jump in full-time post-YCT. When I was a student and had larger projects—for instance, a Shabbaton for 60 people a few years ago—we brought in one of my rebbeim from Pardes, and it was a big event that took a lot of time and energy while also being a student. So I’m excited to have more time with bigger projects like that.

How would you describe your overall experience at YCT?

It was a learning process, a growth process. My text skills since my first year have improved tremendously, which was my biggest concern going in. I feel much more confident in those skills now! CPE (Clinical Pastoral Education) was a really important aspect of my education in addition to the pastoral education and training we got with Dr. Michelle Friedman and Miriam Schacter, LCSW. For me, the focus of my learning was halakha. I felt like that was the knowledge that was making me a rabbi. And I would not be able to be as good a rabbi without the other rabbinic skills and focuses. It’s been really good. It’s nice to have the time to really focus on just learning and growth. And at the end of that process, I am excited to still have time for learning and growth.

We’re curious how you wound up coming to YCT! Can you tell us a little bit about your background?

I grew up Reform. I lived in Florida until I was nine years old, when my family moved to rural North Carolina. We lived there for a few years. The area was really beautiful—there was so much nature, lots of mountains, trees, and berries. But there was also a lot of racism and anti-Semitism, and so we moved to Delaware after that, when I was in seventh grade.

Delaware was obviously much different from North Carolina, and it was where I began to really develop my Jewish identity as a young adult. I started getting involved in youth groups and things like that. In Florida, I had attended a JCC preschool, and then I had gone to public school from kindergarten onward. I only have a few memories of Jewish preschool, and during the years we lived in North Carolina, my exposure to Judaism was just about once a week. Every Sunday, my parents would drive my sister and me 1.5 hours each way to Asheville, NC, to attend the closest Reform synagogue’s Hebrew school. From those times, I had the sense that it was important because we drove so far to get there. I didn’t necessarily learn a lot there, though.

When we moved to Delaware, I got involved in youth groups in middle school and high school through NFTY (a Reform youth group organization). I went to Kutz, which is a camp by the Union for Reform Judaism in New York, for two summers and worked there for two summers. My summers at Kutz were the first times I had any exposure to Jewish learning in a serious way. It wasn’t in Hebrew, it was all in English, but I learned what the Talmud was, and all these different texts that are part of our heritage. And I learned tefillah, or prayer. I felt like I had received almost no Jewish education prior to my time there.

Wow, that sounds like a lot of learning! Was it hard to play catch-up?

Well, it’s all about choices and your priorities. The more knowledge I gained, the more choices I made in that direction. I felt like earlier in my life I wasn’t being given knowledge, so I made more and more choices as I got older that led me towards more knowledge.

Is that knowledge what led you to become observant?

Yes. I would first try and learn about practices before taking them on. And then ultimately at some point in college, I transitioned into accepting the divinity of the Torah.

How did Orthodoxy lead you into the rabbinate?

After college, I spent a year at Pardes in Jerusalem. When I first went to Pardes, I had this idea that I didn’t have what it took to become an Orthodox rabbi. But then my Mishnah teacher Rabbi David Levin-Kruss suggested to me for the first time that I would be a good fit at Chovevei. Then I talked to Rabbi Yonah Berman (‘07), who is on the YCT faculty, and I think that having these individuals tell me that I would be a good fit gave me the confidence to say, “Maybe I can do this.” I then studied for one more year at Hadar to work on my skills, before starting at Chovevei the following year. Once at YCT, the more I moved through the text the more natural it became.

Were studying texts the main attractor for you to become a rabbi?

It’s clear that you have always been a community builder! What are your long-term goals as a newly-ordained YCT rabbi to strengthen Kehillat Harlem?

My dream is to open a kosher bar in Harlem with space for programming and hosting events! In terms of rabbinics, I hope to stay in Harlem for the long term. There’s opportunity for tremendous growth there, and I hope that Harlem will be a model for what Jewish community can look like elsewhere: inter-denominational, intergenerational, and interfaith. I hope we will be in a place where we can serve as a model for other communities.

Can Halakha Go It Alone, Without Kierkegaard?
Next

The Gates of Tears: Reclaiming Jewish Masculinity
Previous
Next