Home >> In the News >> Jewish Journal- Rabbis of LA | Rabbi Aaron Finkelstein: The Educator With a Pastoral Focus 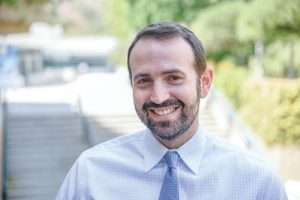 One day, a shepherd was tending his flock, and he became thirsty. As he was drinking, he saw something simple that would change his life forever.

There were small drops of water hitting a large rock, and a deep indentation in the stone where the water fell.

“What mighty power there is in a drop of water,” the illiterate shepherd, who was then 40 years old, thought.

He turned to his daughter and asked, “Do you think there is hope for me? Suppose I began to study the Torah, little by little, drop by drop. Do you think my stony heart would soften up?”

“O yes! Akiba,” she replied. “If you persevere, if you keep it up as these drops of water.”

The Akiba in the story is the famous Rabbi Akiva, who went on to become one of the leading Jewish sages and a great leader.

“It’s a powerful statement about the impact of education and the humility we all need to have,” he said. “It’s a story about a growth mindset. Anyone can learn, whether they are a child or an adult. It’s never too late. The tradition is here for you and accessible to you.”

Finkelstein, a Berkeley native, grew up going to Congregation Beth Israel, a heimish Modern Orthodox shul in his neighborhood.

“We used to call our block the Short Street Shtetl, since a few families who went to our shul lived on Short Street,” he said. “As kids, we really felt like the shul was ours. It was this relatively small community then, and all the teenage boys helped with the Torah reading and davening.”

The rabbi also attended Camp Ramah in Ojai and went on to major in political science and Jewish, Islamic and Near Eastern Studies at Washington University in St. Louis. Realizing he wanted to pursue a path where he could serve the Jewish community and learn Torah, he enrolled in Yeshivat Chovevei Torah, where he received ordination as well as pastoral training to counsel Jews in need.

“I loved the learning at Chovevei,” he said. “I wanted to dive deep into halacha and gemara and do serious learning, and I also wanted to go through the rigorous pastoral training as well.”

At Milken, Finkelstein puts his pastoral skills to good use, whether he’s talking with students, colleagues or parents.

“People aren’t walking pages of text,” he said. “They have real lives and challenges and problems, and you have to be able to genuinely connect with them and understand what they’re going through.”

Finkelstein takes his role very seriously, attending to his community outside of the walls of the classroom. He will go on shiva calls, help with bar and bat mitzvahs and be there for other important life cycle events. Two years ago, he officiated a funeral for a colleague whose husband died of COVID.

“It was sacred and meaningful work, and the school was incredibly supportive of it,” he said. “We are with families during whatever they’re going through, the good times and bad times, and it’s part of my responsibility here to be present for them.”

In terms of issues he sees students contending with, Finkelstein believes that social media has had a huge impact on their lives.

“At the core of my work, I try to help my students connect with the meaning and depth of Judaism, and relate it to their own lives as well. This might mean teaching the Mishna’s four categories of damage to explore self-driving cars and Halakha, or helping students think through who they want to be online and how their Jewish and family values affect that,” he said.

The rabbi also realized that a lot of students are stressed out because of the past two years.

“Teenage anxiety has been exacerbated by the pandemic. When we are with them in person, I want that to be a restorative and joyful time“

“Teenage anxiety has been exacerbated by the pandemic,” he said. “When we are with them in person, I want that to be a restorative and joyful time where they can take a deep breath and connect one on one with their classmates and tradition. Jewish learning, especially face-to-face, isn’t a cure-all, but it can help.”

Like Rabbi Akiva, Finkelstein cherishes learning, and in all his work, he hopes that education is meaningful to his students.

“Working at a school is an incredible opportunity to really be a part of not just the kids’ lives, but also their families’ lives for many years,” he said. “”Schools are like a second home for a lot of kids. It’s where they spend most of their time, and you can have a tremendous impact in terms of helping to share a love of Torah and Jewish tradition.”

JJ: I read that you’re an avid cook, too. What’s your strongest dish?

AF: The Mediterranean mezze platter combo. Techina, eggplant and hummus. I have fun with it.

JJ: What was your favorite subject in school?

AF: Definitely history. I love European and American history, reading about politics and thinking about why things happen the way they do.

JJ: What superpower would you want to have?

AF: Time travel. I want to talk to my great grandfather as an adult. My great-grandfather, Rabbi Chaim Davidovich was a dayan (rabbinic judge), a community rabbi in Denver, an incredible scholar and was very forward thinking. I’d love to talk with him and learn together.